‘CHICAGO’ ON THE ROAD 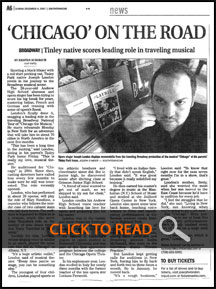 London’s finally done it, snagging a leading role in the traveling Broadway National Tour of “Chicago the Musical.” He starts rehearsals Monday in New York for an adventure that will take him to about 70 cities in North America in the next five months.

“This has been a long time in the making,” said London, sitting in his parent’s Tinley Park home Friday. “This is really my love, musical theater.” READ THE FULL ARTICLE

Stepping into a major role was just the cat’s meow for Joseph London. The Chicago native joined the cast of a North American touring production of Cats about five weeks ago.

London, 30, portrays the wise, and aged, Old Deuteronomy, the leader of the Jellicle clan. He assumed the role with some trepidation and plenty of excitement. “It’s always a little daunting when you step into such an iconic role,” said London during a recent telephone interview from Detroit.

“It’s a little daunting, but it’s so wonderful to have the chance to step into something like that and have the opportunity to give my take on it and what I have to offer to it. It’s such a wonderful role.” READ THE FULL ARTICLE

“Old Deuteronomy (Joseph London), is much like a wise, old grandfather figure that can be found in most family units. London’s Old Deuteronomy was very believable as the CATS displayed acts of affection and respect.” – Denise Harper, Atlanta Performing Arts Examiner

“The Jellicles await the arrival of their leader Old Deuteronomy (Joseph London) who will choose which of the cats will journey tonight to the Heavyside Layer — a kind of kitty heaven.” – Joanne Fox, Sioux City Journal

“I found it delightful that during intermission Old Deuteronomy (Joseph London) just remained on stage and continued to mimic the slight movements cat make when they are comfortably settled in for a ‘sit’. It was very clever and very subtle.” – Jean Gabler, TC Daily Planet

“The cast is most capably completed by Joseph London as Beadle Bamford.” – Bob Rose, The Post Star

“Joseph London as the unctuous Beadle Bamford is divine. He had a wonderful countertenor duet moment in the finale that was absolutely delicious!” – Gail M. Burns, Gail SEZ Berkshire Theater Reviews

“The best vocal display of the evening.” – The Advertiser

“His Operatic Song soared to applause.” – The Advertiser

“[London] kept the audience laughing and cheering.” – The Post Star

“Mr. London lured the audience with his dramatic presence and huge, warm, countertenor sound … one that was almost unwordly.”

“… his performance was Powerful and Commanding.”